For floodplain management purposes, the Federal Emergency Management Agency uses the concept of a “100-year flood.” The term "100-year flood" is misleading. It is not a flood that will occur once every 100 years. Rather, it is the flood elevation that has a 1% chance of being equaled or exceeded each year. Thus, the 100-year flood could occur more than once in a relatively short period of time. The 100-year flood, which is the standard used by most federal and state agencies, is used by the National Flood Insurance Program (NFIP) as the standard for floodplain management and to determine the need for flood insurance. A structure located within a special flood hazard area shown on a map has a 26% chance of suffering flood damage during the term of a 30-year mortgage. One-hundred year floodplains have been identified, mapped and used for further analysis using the county’s Geographic Information System (GIS). 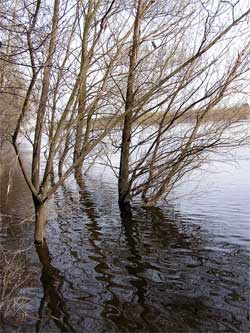 Floods generally occur from natural causes, usually weather-related, such as a sudden snow melt, often in conjunction with a wet or rainy spring or with sudden and very heavy rainfalls. Floods can, however, result from human causes as a dam impoundment bursting (the Johnstown Flood of Pennsylvania in 1889)

Dams and levees are man-made structures that can, if not properly constructed or maintained, result in increased flooding due to a failure. Dams can also cause flooding either upstream or downstream, if improperly operated.

Dam failure can be caused by an array of situations, including flood events, poor operation, lack of maintenance or repair, and terrorism. The water held back by a dam can flow very quickly downstream in a wall of water, damaging anything in its path. The amount of water released would depend on the size of the dam and the amount of water its holding. Although uncommon, dam failures are a potential danger to riverside communities.

A major flood occurred on the Platte River at Royalton on July 26, 1972. This flood had an estimated frequency of 100 years, and had a discharge of 6,850 cfs.

There has also been extensive flooding around Little Rock Lake in recent years.

On a national level, floods claim nearly 200 lives annually...force 300,000 persons from their homes and result in property damage in excess of 2 billion dollars. Characteristically, 75% of flash flood deaths occur at night with half of the victims dying in their automobiles or other vehicles. It may be difficult to believe but many deaths occur when persons knowingly drive around road barricades indicating the road is washed out ahead.

Last year, one of the heaviest rainfalls in Minnesota history occurred in south central and southeast portions of the state on September 14 and 15. Several counties picked up over ten inches of rain, and there were some reports of thirteen inches. Flooding was widespread around Fairmont, Blue Earth, Owatonna, Albert Lea, and into southeast Minnesota. There was one fatality in Austin.

Assume a thunderstorm produces 6 inches of rain in less than 6 hours time near your community. Storms of this magnitude or greater occur several times each year in the U.S WOULD you know what action to take to protect yourself and the people who depend on you for safety? After a major flood event one of the most common quotes from the survivors of the flood is the expression they did not believe it could happen to them or in their community.

There is nothing anyone can do to prevent the occurrence of flash flood producing rainfall. However, by striving for sound flood plain zoning, developing an emergency action plan in advance of the disaster, purchasing flood insurance at least 30 days before the flooding, and being aware of the dangers associated with extremely heavy rainfall and flooding, there is a chance of decreasing the death toll and property damage that results from flash flooding.

One of the Most Important Things to Remember