A drought is a period of abnormally dry weather that persists long enough to produce a serious hydrologic imbalance (for example crop damage, water supply shortage, etc.) The severity of the drought depends upon the degree of moisture deficiency, the duration, and the size of the affected area.

Although the effects of a drought are easily recognized, a drought eludes simple definition. As noted by the Water Resources Center, University of Minnesota, drought is a difficult condition to define because the requirements for water vary so widely. 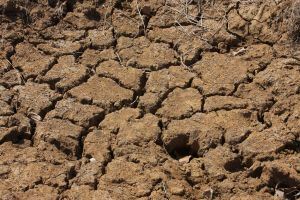 For example, drought for a crop commences when the soil is deficient in supplying moisture for particular physiologic stages. Thus drought is not uniform for different crops nor even within areas as small as a farm or a single field. For the urban dweller, a drought commences when the reservoir or water source is low and restrictions in the use of water are required. A satisfactory definition requires that a demand for water exists and that the demand be greater than the amount supplied at a particular time.

Drought poses only a minimal risk to the cities, houses and the persons residing there. Trees, shrubs and other plants are at some risk during extended dry periods but because of a municipal water system this risk is minimal since most properties can be irrigated.

The water supply for rural residents is at some risk during extended dry periods when annual rainfall is below normal for several years. In these instances some shallow wells have failed. An inventory of rural wells, their condition, depth, water quality and water availability should be undertaken in order to more accurately determine risk.

Benton County is predominantly cultivated land, with 52.7%, or approximately 139,117 acres, of tillable land. Every year at least some portion of the county can expect a dry spell, which may stress grass and other plants but seldom is severe enough to significantly reduce agricultural production. Hay production may be more impacted from these more regular dry spells than crops such as corn and soybeans. Livestock watering ponds could be impacted by dry conditions but most agricultural operations also have other sources of water for animals.

Severe drought like that which occurred during the 1930s could still result in significant crop loss in spite of improved seed varieties that are more drought resistant. Assessing the number of acres in particular crops and an estimate of the value of these crops per bushel will help the county determine potential dollar loss should a severe drought occur. While complete crop failure is unlikely, a significant reduction in production could result depending on the timing and severity of the drought.

Droughts are mainly feared for their negative economic impact. Because of the slow onset of a drought, it is not viewed as a major risk for injury, death, or infrastructure. The main concern during a drought would be agriculture, but a drought can negatively affect many water-dependant industries such as public utilities, forestry, and tourism as well.