Tornadoes are most likely to occur during warm humid spells during the months of May, June, July and August but have occurred as early as March and as late as November in Minnesota. On occasion tornadoes called cold air funnels occur after the passage of a cold front when the air is much less humid but the air aloft is very cold creating enough instability to make funnel clouds. Most tornadoes occur during the warm part of the day - late afternoon or early evening; over 80% of tornadoes occur between noon and midnight. 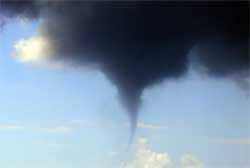 The tornado’s path typically ranges from 250 feet to a quarter of a mile in width. The speed of a tornado varies but commonly is between 20 and 30 miles per hour. Larger tornadoes and faster tornadoes have occurred in Minnesota. Most tornadoes stay on the ground for less than five minutes. Tornadoes frequently move from the southwest to the northeast but this, too, is variable and consequently can not be counted on in all instances.

Last year, Minnesota saw 60 tornadoes, making it the second most prolific year, trailing only 2001 which had 74 tornadoes. There were two F3 tornadoes, one in southeast Minnesota along the Iowa border and another near the border with North Dakota and Manitoba. All other tornadoes were F0, F1 or F2. There were no fatalities or injuries from any of the tornadoes.

Benton County has a group of volunteer Skywarn Weather Spotters who help with keeping track of severe weather when it is in the area. These volunteers are a vital part of our area emergency management team.

Protect Your Property from High Winds.

Before the tornado, tornado watches highlight the area where tornadoes are most likely to develop. Continue with your normal activities, but keep informed of the latest weather information...and be ready to get to shelter in case tornadoes develop quickly.

In the home, go to the basement if possible. Get under a table...work bench...or some other sturdy furniture to avoid falling debris. A stairwell is also a good place to hide during a tornado.

If you cannot get to a basement, go to a small interior room on the lowest floor. Closets, bathrooms and interior halls afford the best protection in most cases. Or try to hide under a bed. Get under something sturdy or cover yourself with blankets. Stay away from windows.

In an apartment, school or office building, move to the innermost room on the lowest level or to a pre-designated shelter area. Stay away from windows. If in a hallway...crouch down and protect your head from flying debris. Avoid areas with glass and large roof expansions.

In a mobile home, car, truck or other vehicle, abandon these as quickly as possible. Seek a sturdy shelter or permanent structure. Remember that many deaths occur when people try to drive away in a vehicle... but get caught in the deadly winds. Avoid bridges since they act as wind tunnels.

Watches are issued when conditions are favorable for tornadoes.

The tone alert feature of NOAA weather radio will also activate specially designed radios sounding an alarm to alert you to the danger. County and local law enforcement centers are also warned of the impending severe weather sometimes by using special phone lines and radio systems. Using the national weather service information, local and county officials decide if they should sound the outdoor warning sirens.