Blizzards, the most violent of the winter storms, are characterized by low temperatures, usually below 20 degrees Fahrenheit, accompanied by strong winds in excess of 35 miles per hour with enough snow in the air caused by either falling or blowing snow to create visibilities of one-quarter mile or less for an extended period of time, usually at least three hours or more. While blizzards can occur in Benton County from October through April, they most commonly occur from November through the end of March. 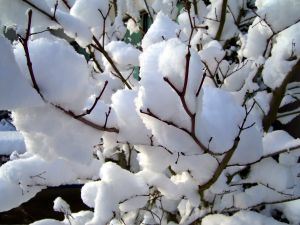 Freezing rain, probably the most serious of the ice storms, occurs during a precipitation event when warm air aloft exceeds 32 degrees while the surface remains below the freezing point. When precipitation originating as rain or drizzle contacts physical structures on the surface ice forms on all surfaces creating problems for traffic, utility lines and tree limbs.

Sleet forms when precipitation originating as rain falls through a rather large layer of the atmosphere that has below freezing temperatures allowing the rain drops to freeze before reaching the ground. Sleet is also referred to as ice pellets. Sleet storms are usually of shorter duration than freezing rain and generally create fewer problems.

Winter storms have affected Benton County many times. Some memorable snowfalls include the Armistice Day Blizzard on November 11, 1940, the winter of 1965-1966, and a few major storms in the early 1970’s. While all winter storms pose some risk, ice storms probably pose the most risk. While ice storms are unlikely to inflict serious damage to households or public buildings they can result in significant safety concerns for the traveling public. Like the severe summer storms, ice storms are not confined to any particular geographic area although those areas having higher population densities and therefore more power lines, trees and other public infrastructure are at greater risk for property loss than other parts of the county.

Blizzards create a greater safety risk in the northeastern portion of the county, due to its more open landscape. The risk is primarily to travelers, truckers and delivery personnel because of severe drifting of snow and the poor visibility that accompanies these storms.

Ice storms affect the mobility of people whether traveling by automobile or on foot and can create significant safety concerns, particularly for the elderly and others whose mobility may be restricted.

The risk to people caused by ice storms is generally quite limited since storms of long duration and heavy precipitation are not frequent and most people can avoid being out during the storm. In addition, warnings for these storms usually provide significant lead time to make alternate plans or seek shelter. For people who must be out or are caught unaware there are significant safety risks whether traveling by car or foot at least until these surfaces can be treated with sand or chemicals to reduce slippage.

One of the greatest threats to people from these storms is the loss of power, sometimes for fairly long periods of time and the much colder temperatures which typically follow a winter storm.

People are at some risk to severe cold particularly if they live in remote areas that have experienced power outages that may be difficult to get to because of impassable roads. Livestock is also at risk during these events.